Hi, my name is Irene and I love the outdoors. I hope you find my site helpful, I want to share all the useful information that I have learned through the many years being in the scouting program. 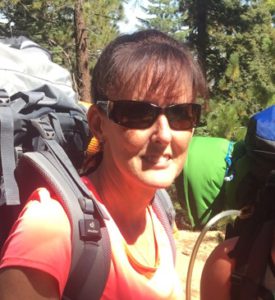 When I was young, my brother was in scouts and became an Eagle. I watched him and all my school friends go through the program and didn’t think much of it until I had my son. My son and I were at a family members Eagle Court of Honor and as one of the gifts this Eagle received was a very large sheathed knife. My son said that he would like to have a knife just like the one the Eagle scout received. I said “sure, you can get a knife like that, but you will need to become an Eagle Scout”, to my surprise he said lets GO!

We went thought the program together, neither one of us knew anything about the program. As, he went through his program I started my own. I quickly became the Troop secretary, then webmaster and outings coordinator. We had many scoutmasters through the first few years we were at the troop. Once my son became and Eagle, at the last possible minute, LOL, he received his coveted knife he worked so hard to achieve. I think his Eagle Rank was secondary to him at the time.

At the time my son received his Eagle the troop was going through a transition of needing a knew scoutmaster. I was asked to step up to the position but was very hesitant, I thought this was male role, especially when you need to mentor young men and lead them to adulthood. After a few months thinking about what I could do for the troop, I accepted, with a few requests. I will get into that on another post.

I Want to Help Other Scoutmasters any way I can.

I have loved this process and want to share it with all who will listen, or read. LOL Going through this program has been very rewarding, I can’t believe all that I have learned and all that I have been able to do. I never thought I would ever have the courage to backpack, sky dive, scuba dive, etc… Scouting has opened me up to so many opportunities!

My Goal is for this Site…

My purpose for creating this site is to help to existing troops try to be boy led and to support the knew troops forming as the girls come into the program.

If you ever need a hand or have any questions, feel free to leave them below and I will be more than happy to help you out.

2 thoughts on “About Irene”