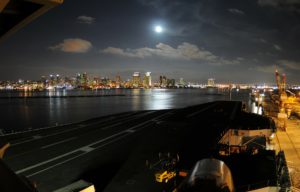 Our August outing for scouts was a weekend in the San Diego area of California.

We stayed at a new venue for the troop, we stayed at the Lake Jennings campground in Lakeside. This was the first time we stayed at this campground. When we pulled up to our campsites, it looked as though no one had ever stayed there. They raked the whole site to make it as inviting as can be. It looked very clean as well. Our sites were close to a fantastic children’s playground, it was all under a shaded area, perfect for little ones. All the attendants we spoke to during our stay were very nice and accommodating. The rest rooms were very clean as well, I know if we ever get back down to San Diego we will definitely be staying at this campsite again.

On Saturday morning after breakfast we headed out to North Island Naval Air Station where the USS Carl Vinson was located. We had a great time, one of our scout parents new an officer that used to be stationed on the USS Carl Vinson. He was able to get the troop a tour of the carrier. Our tour started in the hanger bay where they store all the aircrafts. Unfortunately there were no aircrafts on the carrier. I learn why, a day or two before the carrier comes to a home port, all the aircraft take off and fly to their home base. It could be anywhere in the United States. Then when the carrier leaves for duty, a day or two after the ship gets under way, all the aircraft return to the carrier. I thought that was pretty cool, even though we did not get to see the aircraft.

Our guide took us up to the bridge, wow, that was a lot of stairs, I don’t need to go to the gym today. LOL The scouts enjoyed taking turns having their pictures taken in the Captains chair. It was amazing to see the bridge, where all the commands come out of. We went down to the mess hall, I was surprised at how low the ceilings were. I am not that tall and in some places I even had to duck my head so I would not bump it. I can’t imagine how one has to duck so much if you were on the tall side. Bumped my head coming down one of the stairs as I was trying to watch my step because the stairs were so close together, I need to pay attention to my feet.

Our guide took us down to see where he slept and his little closet. You would have to learn how to travel light if you were to stay on a carrier. For all the hard work that the service people do you would think that they may get a little more room than they do. I can’t tell you how proud I am to be an American, and have all the wonderful people defend this great place we live in.

THANK YOU ALL FOR SERVING!! 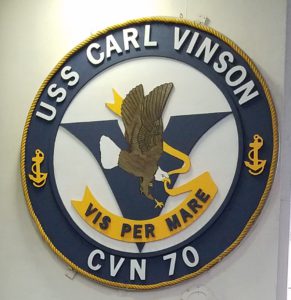 As we were leaving, we got to take pictures under the USS Carl Vinson emblem. What a great tour, our troop and adult leaders had a fantastic time. We learned so much, never stop learning!

When we were done with our tour we stopped and had lunch on base at a local pizza place. We had lunch a little late in the day, the scouts devoured all the great pizza, bread sticks, buffalo wings and fried zucchini. We didn’t have to worry about any left overs, there was nothing left. LOL

When we arrived back to Lake Jennings campground in the late afternoon. No one was hungry, so the adults took a nap and the scouts brought their cards and played until they started to get hungry. We didn’t start eating dinner until about 7pm, which is late for a scout outing. The adults had marinated chicken, broccoli, asparagus and rolls all cooked on the BBQ. The two scout patrols made themselves hamburgers and the fixens.

One of the patrols made a peach cobbler, I don’t think they had enough heat on the bottom of the dutch oven, it was a little too wet. We let it sit for a little to cool off and it thickened up. The scouts didn’t seem to mind, it was gone in a flash.

Lights out was a little earlier than our normal 10 pm, the campground quite time was from 9pm to 7am. Its hard to keep the scouts quiet unless they are all in bed, so we called it an early evening.

Rise and shine, the scouts were up around 7 and started to get something to eat. I tend to pack up before I leave my tent so I can keep an eye on the scouts. Just want to make sure the new scouts are folding their tents the proper way. Our troop tends to leave for home around 9am just after a trash sweep. Also, just before we leave we discuss all that went well and if there was any issues we need to address. We usually go around in a circle and everyone tells what part of the weekend went best for them.

Before we leave, one of the adults sends an email to the whole troop to let the parents know our estimated time of arrival. So when we get back the parents are usually waiting for us. Its nice to give the parents a heads up so the adults that went on the outing can get home to their families and still have a good part of Sunday to what they need to do. When there are parents that are late, two adult leaders need to wait so we are in two deep leadership. So we do everything possible to have the parents there when we get back.

All in all, we had a great tour, campsites, and weather. It was a success, just what we strive for!

Have you ever been on an aircraft carrier? I would love to know what your favorite part was.